Home » Diplomacy » Behind the smoke screen?

Behind the smoke screen?

President Trump’s tweets and what seem to be off the cuff remarks are providing a perfect smoke screen for the media that want to focus on what they think is outlandish rather than do good journalism and find out what is happening behind the smoke screen.

Behind the smoke screen and the bluster and the magician act that the President is using to focus attention there seems to be a lot going on.  Hate for Trump, which the President thrives on, is allowing strategic activity that would remind one of the Kissinger days when the bureaucracy was busing doing busy work while real strategic moves and ground work were occurring behind the scenes. 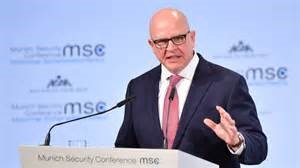 If one follows the National Security Adviser LTG H R McMaster there is not much to see until this last week. During the annual Munich Security Conference he seems to have emerged and has laid down several markers:

In addition he orchestrated the current Olympics lowering of the volume with North Korea.  One can readily see the North Koreans using the very fragile détente with South Korea coming out of the Olympics as an excuse for a “delay” in missile testing.

One can be sure that both LTG McMaster and Secretary of Defense Mattis, who has also adopted a low profile, are very aware of the trategic weapons growth by the Russians and Chinese and are laying long term plans to address the potential imbalances.

As the remarks in Munich indicate relations with Russia and the current sanctions will not improve until Russia makes a positive move in the Ukraine or elsewhere. In the meantime the nuclear modernization announced by the President will go on unabated.  Is the ground work being laid for a new round of arms control negotiations in 2019?

If the naval armada that has gathered in the South China Sea as a deterrent to North Korea starts migrating towards the Persian / Arabian Gulf one can anticipate the screws being applied against Iran.  Obviously Secretary of State Tillison and LTG McMaster’s trips to Turkey and discussions with the Saudis and Israelis have laid the groundwork for such actions.  These discussions also have further provided the venue for a consensus on how to deal with the continuing Syrian debacle.

In the first year of the Trump Administration while working behind the Trump smokescreen Trump’s National Security Strategy (NSS), was put together by McMaster’s team. It champions a realpolitik worldview that puts American national interests first and sees the world as a competitive stage. “The United States will respond to the growing political, economic, and military competitions we face around the world,” the NSS states.

Additionally, it has a focus on “revisionist powers” China and Russia and “rogue regimes” North Korea and Iran as acting in ways that are against American interests. “China and Russia challenge American power, influence, and interests, attempting to erode American security and prosperity. They are determined to make economies less free and less fair, to grow their militaries, and to control information and data to repress their societies and expand their influence. At the same time, the dictatorships of the Democratic People’s Republic of Korea and the Islamic Republic of Iran are determined to destabilize regions, threaten Americans and our allies, and brutalize their own people.”

The strategy development in which the entire national security apparatus –State, Defense, and Intelligence Agencies etc.—participated took a year.  The media has given little attention to this strategy complaining that it is lacking in detail.  One is now starting to see the details based upon that the interests and objectives that were clearly defined and agreed to across the government.  In their most likely timeline now is the time for the deliberate but well thought out execution behind the smoke screen provided by the President.

It will be fascinating to see the media reaction as they see behind the smoke.  Or will they given their Trump hatred?